After taking confidence with your means of transport, we'll leave the Porto Antico Area and together will run along the characteristic Via del Campo, the street sung by Fabrizio De André in one of his most famous and scabrous song.

In Maddalena quarter, it will be funny to lose ourselves in narrow alleyways - called "Caruggi" – and to reach the old Via Garibaldi and his palaces of nobility.

Our tour will continue leaving the old town and carrying on Piazza Fontane Marose, Piazza Corvetto and toward the wonderful unknown Galleria Mazzini, until arriving to the central and monumental Piazza De Ferrari with the impressive Carlo Felice's theatre and Palazzo Ducale.

We'll go down Via San Matteo where we'll find the homonymous church.

It was a patrimony of the D'Orias' family which own another palace in the little square  where their descendans  live.

Some historical famous people were descended from this family, which remains really important for Genoese culture.

In particular, Branca D'Oria – one of the characters in the Dante's "bolgia" – lived in this palace, built with typical Ligurian sandstone.

We'll move then toward  Piazza Campetto and continue to follow  Via di Scurreria, to arrive in front of St. Lawrence's Cathedral. 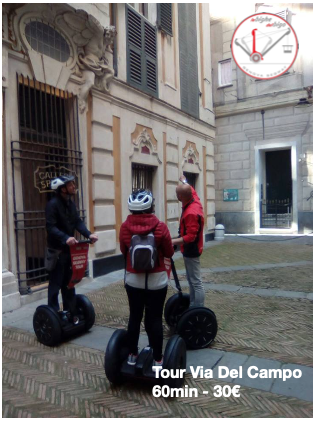